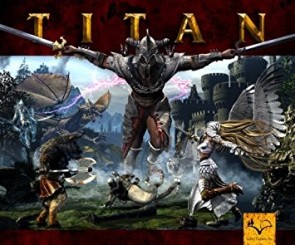 Titan is a masterwork of Ameritrash design.

Up to six players take on the role of "Titans", fast, strong, leaders that muster minions into legions for battle. As more battles are fought and successfully completed, one's Titan grows stronger; gaining the ability to teleport, and throwing more dice when striking. The unique concept of masterboard for strategy (recruiting and hunting) and battleboards for tactics (for fights, with terrain modifiers), make this one of the finest AT games ever made. Detractors complain of game length and complexity, but these are the same facets of the game that have this long out-of-print title fetching three figure sums on auction sites. There simply is not a better game at blending action and strategy in a fantasy setting. A recent 2008 re-issue from Valley Games finally brings the visual presentation up to the level of the gameplay.

Free play-by-email is available at ACTS .

A free Java version called Colossus is available for solo or networked play via hosted games.

Cosmic Encounter
4.5
C Colorcrayons
"It's so good, you don't have to be told how..."

Arkham Horror 2nd Edition
5.0
H Harkonnen13
"Great game solo or with others. The rule book is..."

Sons of Anarchy
2.5
V Vysetron
"For a game about violent biker gangs there sure isn't..."

Gamma World Roleplaying Game
3.5
H HiveGod
"...that will take your imagination from zero to 300 mph..."

Diplomacy
5.0
RB Ryan B.
"Diplomacy is the father of all negotiation games...with a little..."