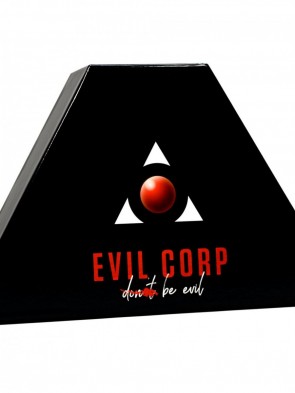 Evil Corp comes in an irregular black box which starts the evil early by refusing to stack neatly on my shelves. Even the rules are evil, printed on a folded-up single sheet which proves several times more evil than a stapled booklet when I try to read it. The game flow is easy enough to understand, but it’s a horror to reference. It’s all cleared up after a quick rules overview on YouTube.

Evil suffuses the hexagonal slot together board and the neon dayglo pieces. Particularly so the little triangles that stack into a pyramidal evil base, but you’d expect that. Each side of the hexagon represents a continent, with spaces for cities where you can place your businesses and one for an evil base. It looks cool and stylish enough for me to snap a photo and post it on Twitter.

For our first game, we’re limiting the evil with just two players. I am the Oligarch, promising humanity a future free of disease. My opponent is the Expansionist, cornering markets with their labour-saving robots. We start with three active businesses each in different cities and $5 billion in pocket change to spend.

Each turn starts with us collecting revenue for the business we own, cue much gloating and rubbing of hands as those billion-dollar bills start flooding in. Then it’s on to the meat of the game, such as it is, which is buying opportunity cards from the deck. These are dual effect: on the one hand, you can play them for an instant in-game effect. In the first turn, I found a new business and blind-steal a card from my opponent’s hand. 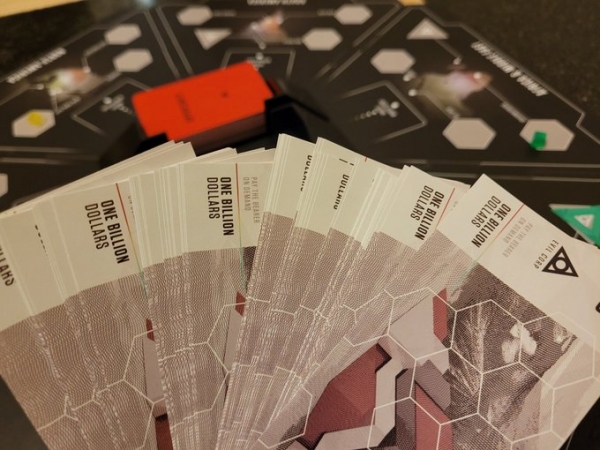 This, it turns out, over much wailing and gnashing of teeth, is rather useful for the other option on the card: building toward the win condition. Victory means finding and playing, in order, three phase cards that match your colour. The card I’ve just stolen with such indecent glee is the first of these that I need. You can play these phases in colours that are not your own, but they risk being bought out in a hostile takeover by the player they match.

Finally, I draw and play a World Event. Most of these add an economic bonus or penalty to income from one of the board sectors. Each carries a pointed, if easily ignored, piece of social commentary like “tax breaks are a firm’s best friend”.

With two, the game lacks the necessary back-and-forth to make it really interesting. Oh sure, there are some fun tussles over economic territory, and we have a good laugh over the “motivational guru” card that does nothing but clog up your hand and offer a tempting target for someone else to steal. But mostly it’s fishing in the deck, seeing who can make it first to three phases. It turns out it’s me, and I’ve got the cool $9 billion needed to usher in the endgame.

After I win, we take the evil to the next level by using my iPhone to follow a link at the bottom of the card which expands the endgame with some online text. Our story lauds anti-vaxxers with “an appropriate level of medical paranoia” for avoiding a deliberate “coronavirus pandemic”. We get this is supposed to be satire but in the midst of a genuine pandemic, some players not getting the joke could be genuinely dangerous.

I go to type my notes up in Google docs. So far Evil Corp seems a sensible compromise between the expectations of a mass-market game and the finesse of a hobby title. But it has more of the take-that of the former and less of the depth of the latter, making it potentially unsatisfying to either party. But then, playing it with two isn’t showcasing it in it’s best light. So I get on Facebook, click away from my various notifications, and message a few people to see if I can get a game arranged. 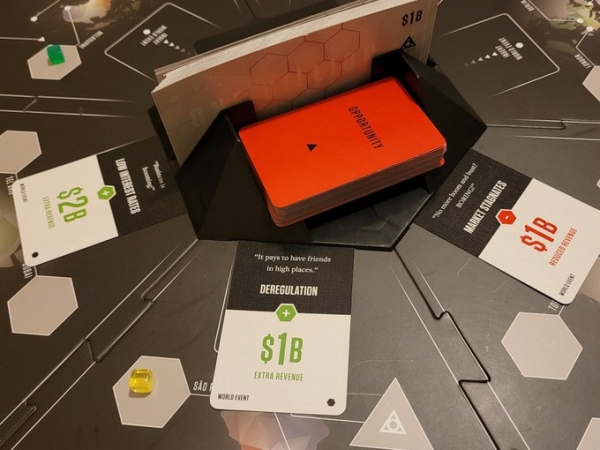 In the end, we manage to get four people around the table, with varying degrees of hobby exposure. And lo, with four, especially four who are absolutely willing to trash talk their way to victory, Evil Corp leaps to evil life. Playing other people’s phase cards becomes a calculated gamble: it gives you the short term payoff of a base piece, but in the long term it risks offering them a vital step on the route to victory.

The game that emerges is weirdly keyed around hand management. To start with everyone has a hard limit of three cards. This makes the risk of discarding vs playing those phase cards much more acute, especially if your cards accumulate useful effects. You can increase the hand limit by - what else - playing phase cards to add to your base. It’s Catch-22 without the subtlety to the satire.

And so we get stuck in, sabotaging each other’s businesses, whooping when events add to our profits and jeering when they detract from someone else’s. Sure it’s not Chess but it doesn’t need to be: for all the card-fishing involved it’s a light, fast game with plenty of excitement that doesn’t outstay its welcome. They enjoy the online story at the end. Everyone has a good time, with the non-gamers seeming more likely to want to return to it than the hobbyists.

What concerns me more is that despite people pulling out their Apple or Samsung phones from time to time, despite them using Google and Bing for searches and news, no one talks about the elephant in the room. Even when everyone has an elephant in their hands, and there’s an elephant on the table saying “look at me, I’m an elephant!” Because with most of the satire restricted to what’s on the cards rather than what’s in the play, it isn’t shouting loud enough. But hey. I may have reservations about how Evil Corp goes about it, but at least it's trying to do something.

June 28, 2021
Rating
3.0
Evil Corp
Evil Corp does an enjoyable job of walking the line between mass and hobby appeal, but its important satirical elements get a bit lost in the process.
MT
Matt Thrower #1 Reviewer 286 reviews