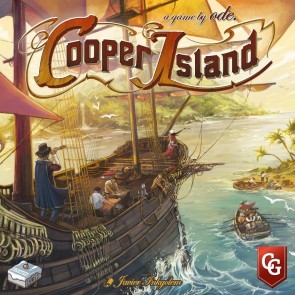 Do you remember the TV series, Lost? In it, a group of people found themselves marooned on an island after an airplane accident. While there are no planes in Cooper Island, your first experience of the game may be a lot like that of John Locke and the rest of the gang – alone on an island far from home, with no idea what the bloody hell is going on.

Cooper Island is the brainchild of the mysteriously-monikered ode. The lack of capital letter and full-stop are his choice, he is ‘ode.’. It’s an unusual Euro game that marries worker-placement and tile-placement, along with a bit of resource management. Each player is developing their own peninsula of the oddly-shaped island, and resources are in short supply. You’re also sending boats off around the island to earn you more stuff, and also clearing ruins to build some statues for… reasons.

The only way is up…

…or so Yazz and the Plastic Population will tell you. ‘Up’ is an important concept in Cooper Island, because your tile laying is no longer constrained to just X and Y axes. No, friend. Now you have a Z axis too, and you can lay tiles on top of other tiles to build toward the heavens. It’s not just a way of dealing with the small area you’ve got available for laying your landscape tiles. The layer height determines the amount each resource is worth. A forest placed on the third layer gets a cube placed on it that’s worth three wood. 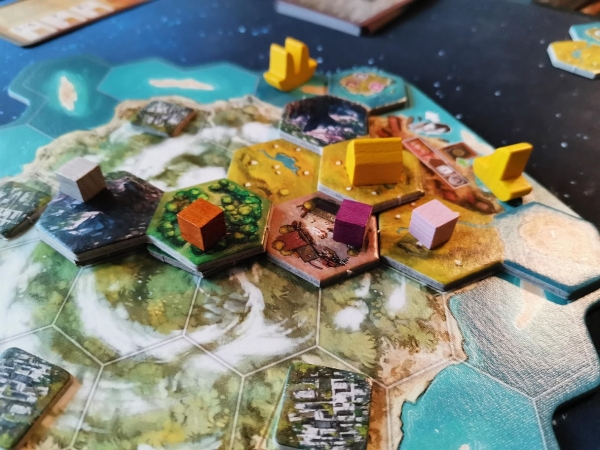 You can get an idea of the vertical stacking here

It’s a really neat mechanism that’s new to me, which both figuratively – and literally – adds a new dimension to the style of game. There are a lot of things you can do with the resources you generate, but in typical heavy Euro style, you’ll never do them all in one game. You can build boats which increase your income at the start of each round, and build buildings, which earn ongoing bonuses and unlock more storage space on your player boards. You can even trade gold and cloth with supply ships to unlock more bonuses.

Resources in Cooper Island are always scarce. Whenever a game gives you barely enough to do what you need to do, that’s a sure sign you’re veering towards the heavier end of the board game spectrum. When you first start playing and you realise you can pay for things with the resources on your player board, AND the cubes on your landscape tiles, you get this little burst of excitement. So many games make you harvest those resources to use them. That excitement is short-lived, however. 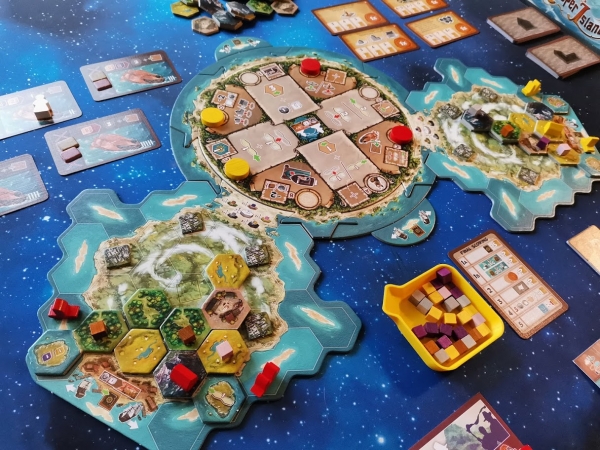 A two player game in progress. The island configuration is really clever, tiles are added jigsaw-style based on the player count

Landscape tiles only ever generate resources when you first place them, and never again, not unless you raise their level by placing another tile on top. But you can’t place another tile on top if there’s a resource or building there, so what then? Well, you can move that resource to your player board whenever you like, but it immediately becomes a one-value resource, instead of the three or four it might have been while it was on the map. Every single turn feels like a puzzle to solve, a bit like Spirit Island, but not as stressful.

Walking that tightrope of what you need vs what you can produce is the heart and soul of Cooper Island.

Are you thick, or what?

I might not be Gary Kasparov, but I’m reasonably good at games. I can pick up heavy games pretty easily, and don’t usually struggle with finding a strategy for a game once I’ve played it once. But boy, did Cooper Island make me feel stupid. Far from being a game like Clank! where you’re looking at sores of 100+, in Cooper Island you’re looking to see how many 10s of VPs you can get to. I’ve played games where I’ve struggled to get anywhere near 10. When you play a game for 90 minutes and come away with 5 VPs, it can feel deflating. 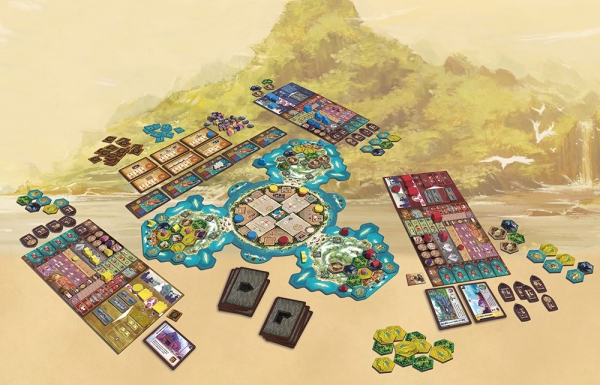 This is what a three player setup looks like, for comparison

If you come to Cooper Island and you’re used to much lighter games, it could come as a shock just how hard it feels to get things done at first. If you’re willing to stick at it though, and use your first couple of games to properly understand what you’re trying to do, you’ll find a tremendous game waiting for you.

For some people though, it’s never going to gel. If you don’t have the patience to delve into the mechanisms of a hard game, or if you simply don’t like not being able to do well after a single play, it’s probably not the game for you.

There is a solo mode for Cooper Island, but you need to be careful which version of the game you buy. The Solo Against Cooper automa was released after the first printing. It’s now included with the second edition of the game, otherwise you’ll need to buy it separately, as I did. Just check with wherever you buy the game from. 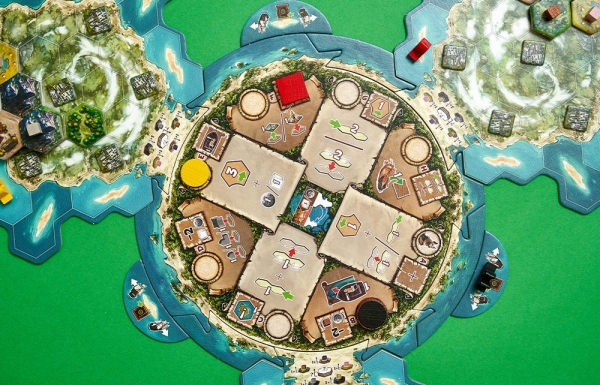 A better look at the centre of the island, where your workers are placed to take actions

The solo mode is really smooth and easy to play, and the four different setups all play differently. The automa doesn’t compete to develop his part of the island the way you do, instead it tries to block worker spaces and send its boat around the island for bonuses.

Cooper Island is a fantastic, heavy, Euro game. It’s the epitome of a modern Euro game in many ways. It’s tricky, your turns are brain-melting puzzles, and there’s almost no player interaction. The board and presentation are beautiful, even if the player boards are just thin card, in the Terraforming Mars style.

It’s a game that really rewards repeated play. What feels like the correct way to play – spreading out across your part of the island – isn’t necessarily the correct way. I read some tips from the designer, which said that you should be looking to unlock your first extra worker after the second (of five) rounds. To put that into perspective, in my first game I didn’t manage it until the fourth round.

If you’re looking for a lightweight tile-laying area control game, look instead at something like Ishtar. If, however, you like your Euros heavy, with an emphasis on optimisation at every step, you’ll love Cooper Island. Just remember that the first couple of plays might well make you feel like you are terrible at the game, but it’s just the way the game is. Heavy Euro fans will love Cooper Island.

Review copy kindly provided by Capstone Games. Thoughts and opinions are my own.

June 22, 2021
Rating
4.0
Cooper Island
Cooper Island is a fantastic, heavy, Euro game. It’s the epitome of a modern Euro game in many ways. It’s tricky, your turns are brain-melting puzzles, and there’s almost no player interaction.
A
adamr 1 reviews