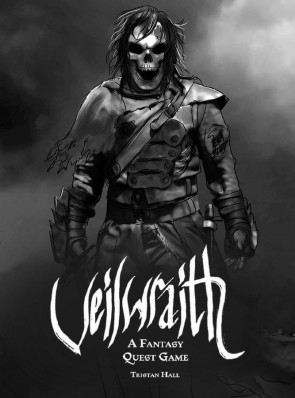 The end of the world is black. So black that it comes in a black box, with black and white art, containing black tokens and black cards. But even though it’s the end of the world, you’ve survived as some kind of spirit and you might be able to save it. Or something. It’s very black and there are lots of meaningless names like “Deja” and “Anima” so I’m not really sure. All I do know is that it’s solo, as the end of the world should be, and it involves playing cards.

Two kinds of cards, to be exact. At the start of my turn I draw an enemy card which, if not banished, will sap my spiritual health. Then I draw a memory card, most of which help with banishing enemies although some offer other useful effects like healing or extra actions. Each enemy has a number that needs to be defeated by either Fight or Influence and this is where things get interesting.

In front of me are the numbers one, two and three like Veilwraith is teaching me to count, and beneath each is a card representing an action. Two of them are Fight and Influence and if I take it as my single action for the round it has the power number above it. Then that card gets slid down to number 1, promoting the other two.

It doesn’t take long to learn that playing Veilwraith is like juggling with balls that are forever twitching aside just as you're preparing to catch them. On my first turn, I draw a Mystic enemy who needs more influence to defeat than I can manage. So from the first, I’m behind the curve. I take the Fight action instead, which promotes Influence to the 3 slot and, without a Fight target, allows me to draw another memory. So I’m all set up for the following turn.

But the next foe I draw is a Pariah, an irritating thing that clogs up my memory deck even after I’ve defeated it. It also needs Influence to defeat but as I take the Influence action and banish the Mystic, my Influence cycles down to 1, leaving me unable to defeat the Pariah next turn, and putting me further behind the curve.

It turns out that behind the curve is exactly where Veilwraith likes you to be. 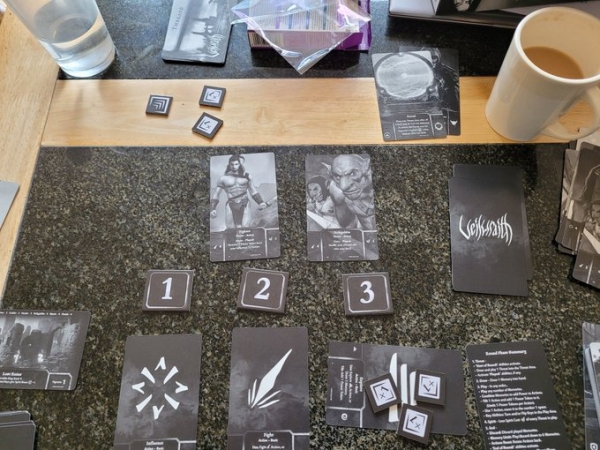 As if the constant juggling with the Fight and Influence balls wasn’t enough, it isn’t long before the game throws me a third ball. There’s also an Explore action that is taken to gain Keys, another kind of card that’s drawn from the enemy deck. Get all five keys and defeat all the boss enemies and you’ll pass the scenario. But Keys are rarer than enemies so the Explore action rapidly rises to the three slot and sits there like a malignant toad, stopping me from promoting the Fight and Influence actions I need to overcome enemies.

I could use it just to push it down to one and get a card. But where does that leave me? Further behind the curve, where else. And then, typically, I draw a Key on the next turn. Keys are not merely figurative: once gained they can be spent for a precious extra action to try and get back on top of things. But ultimately the only way to get a grip on this spiralling disaster is to push past all the keys and win.

Every card that flips off both decks is burnished with black and white pencil art. Much of it is standard fantasy although executed with skill and flair. But now and again a card pops off that draws you into a more mysterious world. A thoughtful scholar. A hooded, tattooed woman. The stark contrast of the monochrome pushing it off the cardboard at me, and out into the real world.

As this punishing ballet goes on, I see a surprising variety of enemies. In addition to using an action each turn, you can also “tilt” a different one, giving it a bonus for its next use - unless an enemy takes it away. One foe, the Healer, gives you spirit back. It’s an impressive range of effects for such a simple game. But then again, so is the terrifying high-wire act that Veilwraith forces you to perform.

What finishes me off is the first level boss, the Goblin King. No kindly David Bowie lookalike this, but a mean opponent who needs both Fight and Influence to defeat. This pushes my already stretched resources over the limit. Having only taken about twenty minutes, it’s too tempting to shuffle the decks and start over.

This time I have a better grasp on how to juggle those balls. Practice is the only way to learn. I get into a rhythm of taking actions, tilting cards and accumulating memories and bonuses. Trying to anticipate what might come up and pulling out all the stops to make sure I don’t accumulate too many enemies. Dealing with the Goblin King, however, means other threats go unanswered. Indeed after defeating him I presume I’ve lost, only to realise I have to scrounge up a measly 3 Influence action to make it through the portal to level two.

That’s right: this is a campaign game. There are five scenarios - the game calls them vignettes - each with its own mix of enemies, bosses and special rules. You have five lives to pass them all for ultimate victory. In between you get to upgrade one memory card from an optimistically large range of options. I go straight for one that gives me extra actions until I see it has to replace the extra action cards from the basic deck. So I come up with a different strategy instead and seal the decks up in bags for another time.

A couple of days later I clear space on the table, unseal the bags and carry on. The next vignette is the Nesting Woods, which boasts three boss monsters instead of one and a new kind of enemy that needs all three skills to defeat. Armed with my solitary memory upgrades, this feels like a big step up in difficulty, and I stumble early.

But despite the difficulty, there’s still that lure to carry on. There’s no flavour text here and what there is is esoteric and easy to ignore. But the game is easy to set up and tear down and going through the motions feels like piecing together the fragments of a journey. I’ve purposefully not looked at the vignettes and enemies yet to come to enjoy the thrill of discovery as a reward for when I get there. What little world there is left after this uncertain apocalypse feels like it’s worth saving.

June 14, 2021
Rating
4.0
Veilwraith
MT
Matt Thrower #1 Reviewer 286 reviews
June 14, 2021
Rating
4.0
Veilwraith
Doing a lot of heavy lifting with nothing more than a clever central mechanic and some great art, Veilwraith is one of the more memorable solo challenges on the market.
MT
Matt Thrower #1 Reviewer 286 reviews