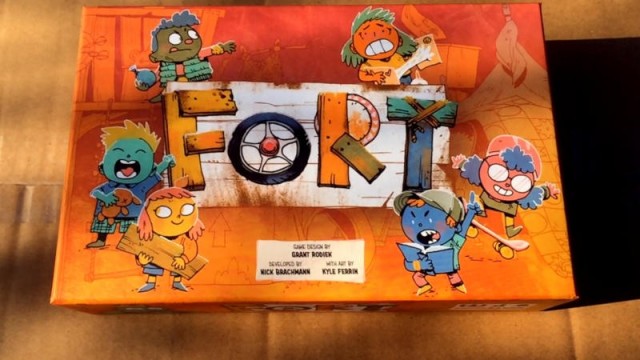 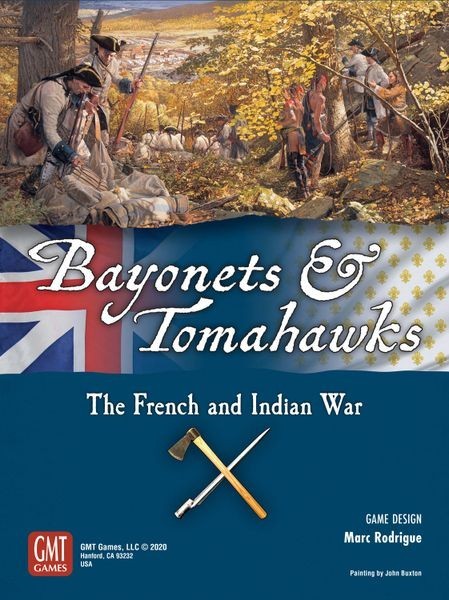 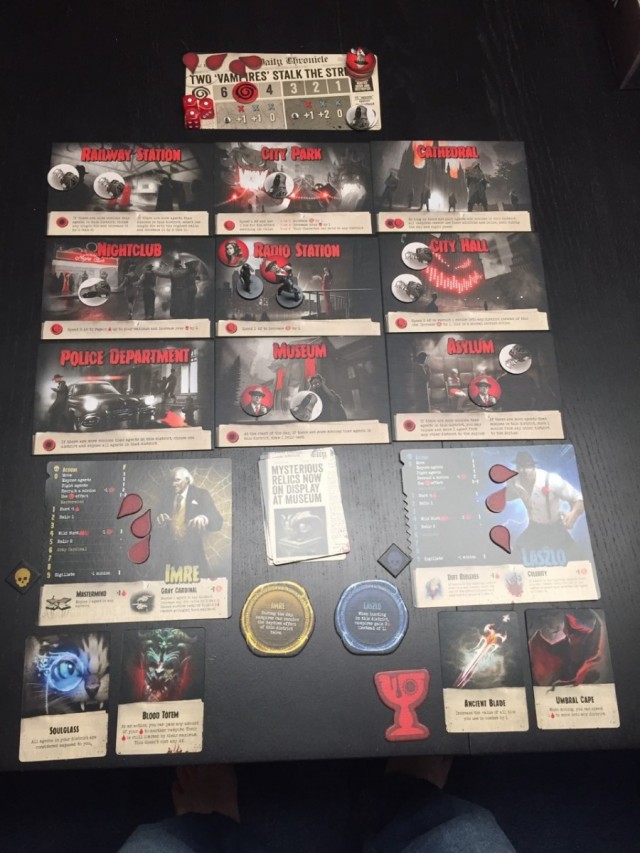 Masters of the Night Review: A Modern Game with a Retro Look 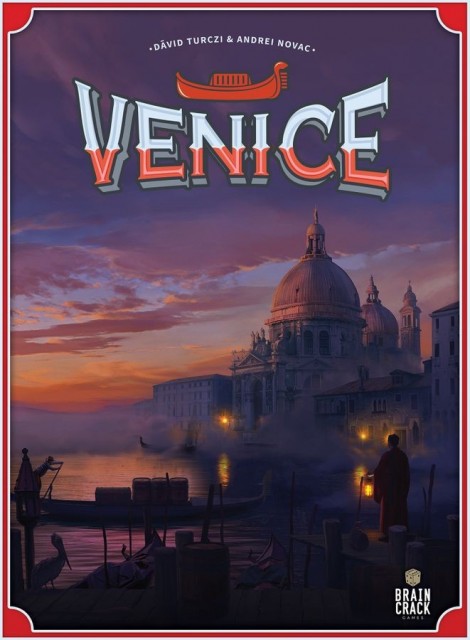 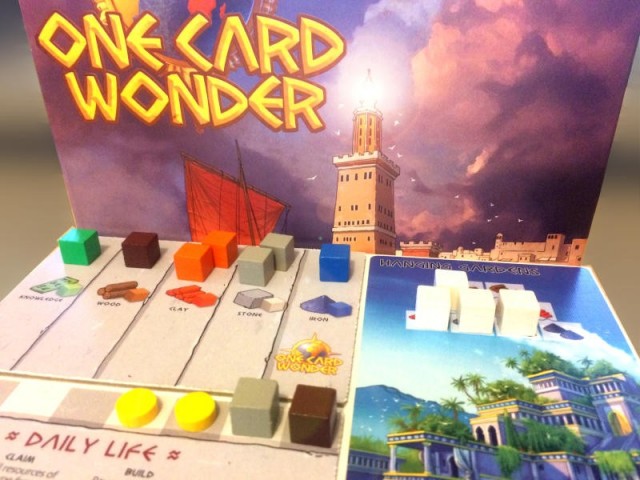 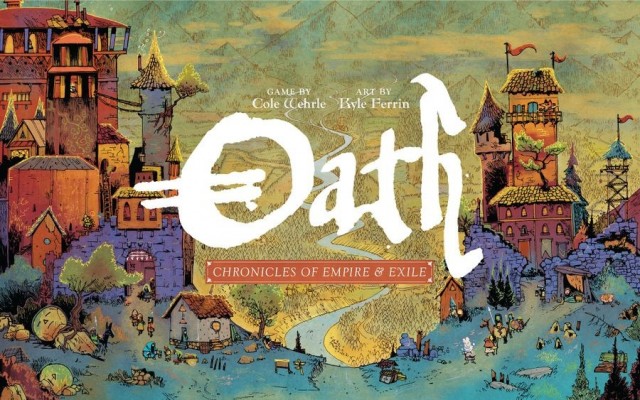 Oath: Chronicles of Empire and Exile Review- Heavy is the head that bears the Crown 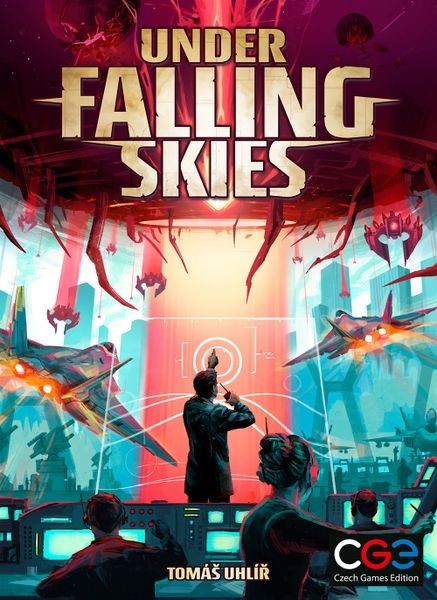 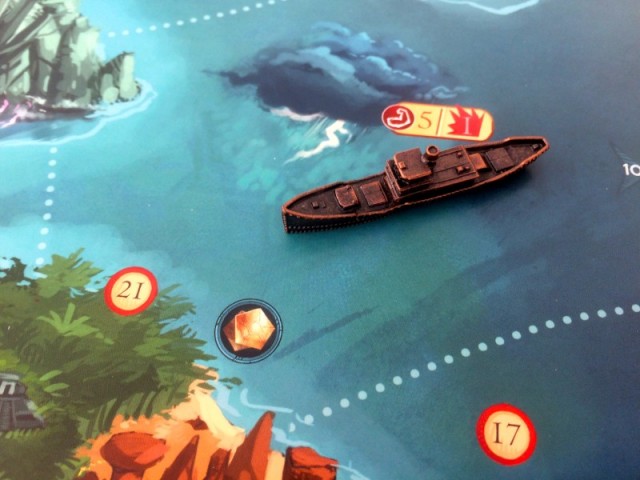 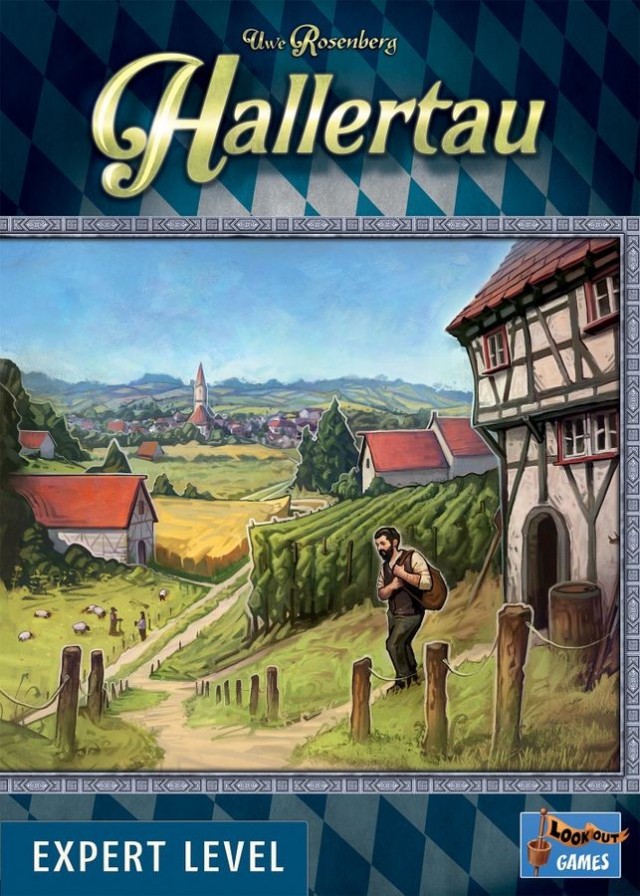 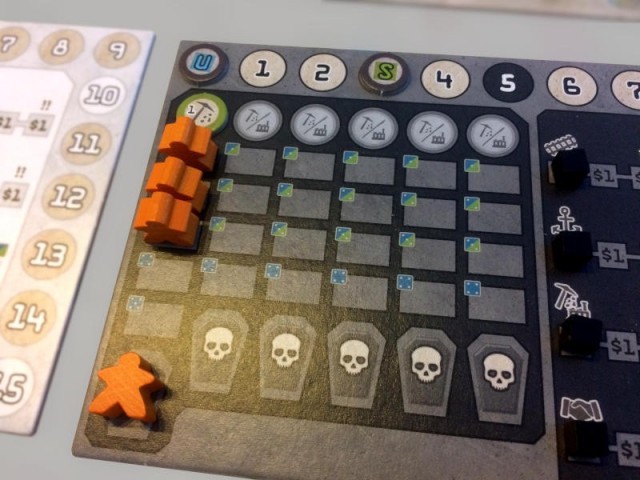 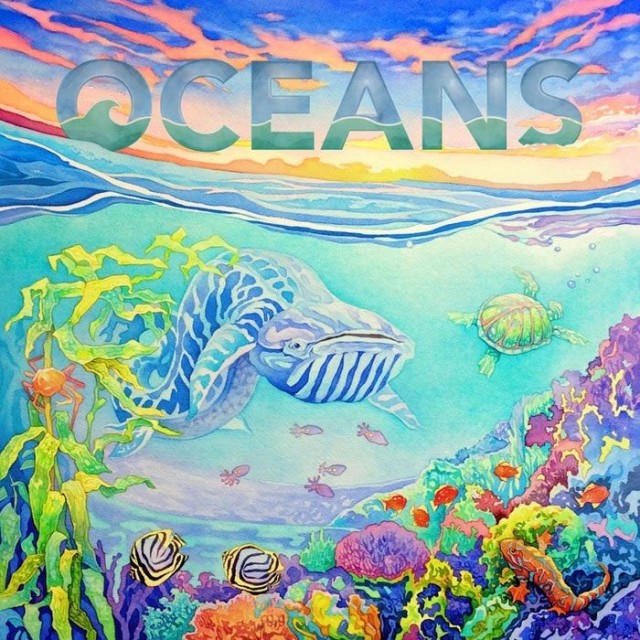 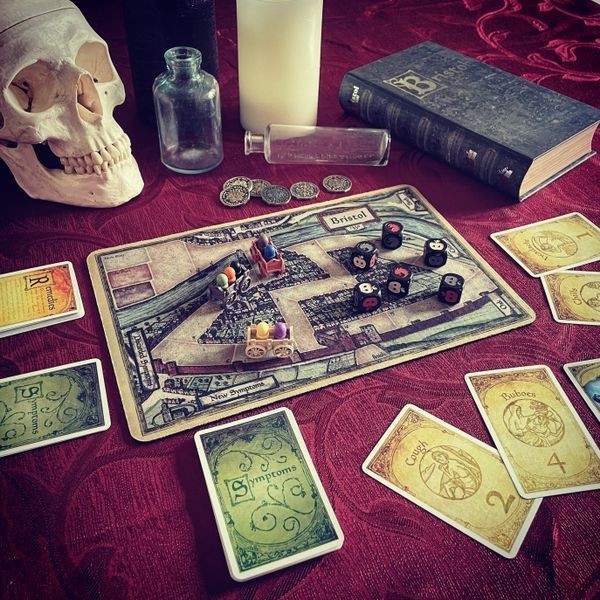 Bristol 1350 Review - Bring out Your Dead 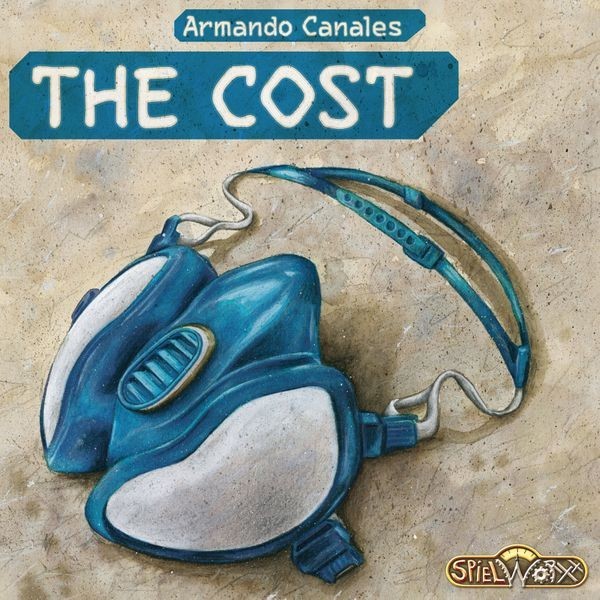 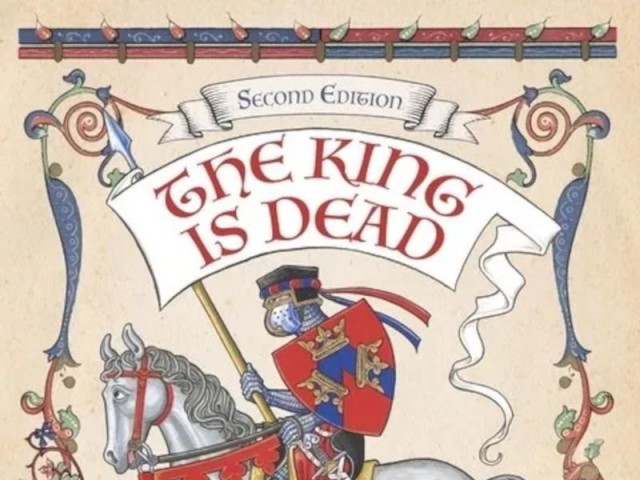 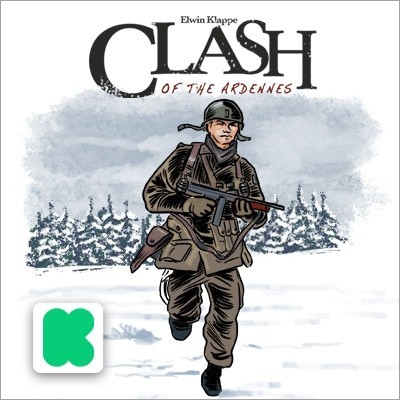 Clash of the Ardennes Review: Unusual Presentation of a Tired Topic 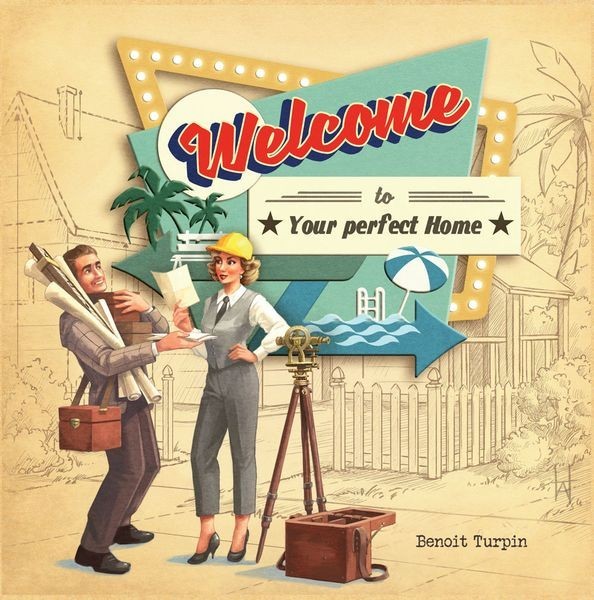 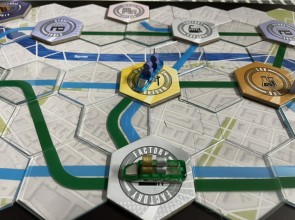 Maglev Metro, new from designer Ted Alspach and his Bezier Games imprint, is a train game but it’s one that is more in the tune of “Transeurope Express” than “Chattanooga Choo-Choo”. It’s a spectacular production, combining streamlined Helvetica-esque minimalist graphic design with unique physical qualities. The rail tiles are clear acrylic so that the connections you and other players lay during the game are super-imposed. The large, chunky station hexes sit in recessed spaces on the board. The trains themselves are wonderful little metal and translucent plastic bits that make me think of the Micronauts.

The concept is cool. In the near future, competing rail corporations deploy three different types of robots (gold, silver and bronze) to perform various engineering, construction, and development tasks as they build out the magnetic levitation subway system throughout either Berlin or Manhattan (the board is double-sided). Delivering robots to their worksites (labs, factories, and warehouses) via your rail system allows you to place them on your player board in various positions, which is how the game abstracts upgrades to your abilities to take additional actions over the base two, build track, move across multiple links, pick up/drop off passengers, and so forth. 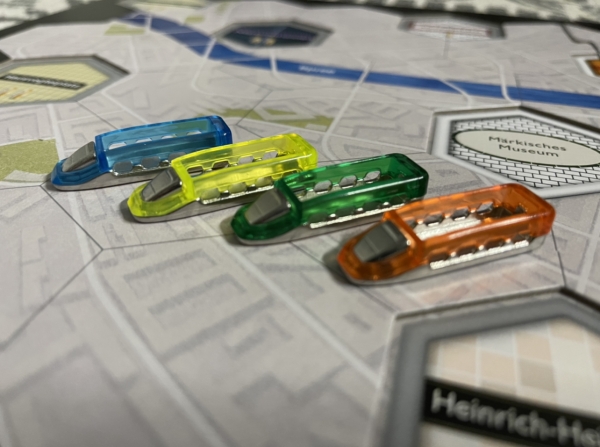 In many rail games there is a transition from investing and development to operations and profit, and that is absolutely the case here. But there is no money, instead what happens is that players eventually build “human” stations (stores, studios, embassies) and flesh-and-blood passengers are added into the mix. Delivering salespeople and diplomats generally allows you to put them on your player board in a sort of set collecting matrix with bonuses for like and unlike sets.

The endgame resolution is a little complicated and requires a scoresheet, but there are also bonus cards that you can earn for making certain connections, having or not specific passenger colors, or for various rail building achievements. You get four of these bonus cards but can only score one unless you assign delivered passengers to spaces that unlock additional bonus card scorings.  It’s not overly complicated, overly analytical, or overly long and by the end of it you’ve got a neat looking subway map with colorful rail lines criss-crossing all over it.

Maglev Metro has quickly become one of my favorite games in this genre. My gold standard is Railways of the World, a more accessible and much larger version of Martin Wallace’s classic Age of Steam design, and there is undoubtedly some traces of that game’s influence here. But it’s a leaner, less financially punitive game where the tight economy of actions can be more delightful stressful than taking out additional loans to cover operating costs for another round. Opening up extra actions, which each take four deliveries, is a priority because you quickly find yourself needing to do more than two things a turn- but you must balance that with assigning delivered robots to upgrading the efficiency of each action.

There’s a lot to consider throughout the game- each upgrade category needs specific robot colors after the first one, which may cause you to consider opening a lab, factory, or warehouse just to get the free robot it comes with. You might need to spend a few actions refilling a station, hoping to get a couple of artists to load up and take to a studio assuming you’ve got the capacity to get them on board. And here’s a twist- you can’t just run all over the rails, you’ve got to ride them out to the terminal stations to turn around unless you’ve invested a robot into developing the Reverse Train tech.  Above it all, you have to always be considering your rail lines and where the most lucrative routes are and how you can go about your deliveries most efficiently.

I find the scoring to be just a touch cumbersome but I wouldn’t say it’s overwrought as it abstracts performance, valuation, effectiveness, and profit in a fairly tidy fashion. It’s a little spreadsheet-y, but the end result feels satisfying. I do think the pocket calculator brigade might over-analyze aspects of the game, as they do, but I am also not sure that this is a game that the hardcore train gamer is going to choose over an 18xx title.

The multiplayer game is great at 2-4 players and scales just fine. Of course there is more competition for passengers with more players, but at 2 it’s a nice outing for an hour or so. The solo game, thank god, does not require a rebus-driven automata and is instead a simple score challenge. There are a couple of minor rule deviations including removing a passenger from the bag every turn- this is an interesting one because the game ends when there are no more to draw. This means that building the human stations and introducing those passengers into the mix is extremely important, and there is a palpable time pressure to get those stations unlocked on the player board. I’ve really enjoyed setting it up and playing two or three games in a session to see how utterly miserable I am at it.

This game has been quite a surprise. As most of our readers know, our writers and content creators here at ThereWillBe.Games have a more curatorial approach to what we review. We do not get a lot of unsolicited review copies. So we have to go out and ask for them, which means we generally have to vet what we review. I saw this game and at first I didn’t think much about reviewing it but then I saw that it was a train game about subways and robots with unusual pieces so I thought I’d give it a shot. And I’m glad that Bezier gave us the kind consideration of a review copy because this is one of the most fun games I’ve played this year - so far it’s the one I’m most excited about playing again.

So the trains move, it’s not just about laying track? Pick up and deliver?

Michael Barnes replied the topic: #320837 18 Mar 2021 19:46
Yes, and like Age of Steam and similar rail games you upgrade to move more links. The color of the station is the “demand”. But the limitation that you can only move along your line to the terminal station is pretty interesting...it prevents some of the weird deliveries you can make in AoS for example.

jason10mm replied the topic: #320868 19 Mar 2021 11:53
How "in game" do those cards and set collection scoring aspects feel? Are they just arbitrary scoring goals with no broader thematic connection or does it feel like you are making a rail system that could exist in a real environment (my train company specializes in commuter access, but that competitor does mostly heavy rail, his cars smell like diesel fuel, don't ride those!). Little touches like that go a long way towards immersion for me versus just "get 1 of each color because its mechanically more difficult" or "we balanced the game that way and just need you to do it".

Sagrilarus replied the topic: #320869 19 Mar 2021 12:04
Yeah, I think that's sort of the heart of my question as well. I've only played a few games in the genre, but it never feels like I'm moving freight. It feels like I'm laying track. I think that's the intention of the design, so I can't really knock it. And you do pick up cubes, so that implies delivery. But the five-year-old in me wants to see the choo-choos move.

Those are pretty locomotives in the picture. But if they're only used to represent who owns a line then they're glorified chits. I want to see those pups cruise around the board, and there aren't a lot of games where they do that. If this one does I'll be a whole lot more interested.

Michael Barnes replied the topic: #320882 19 Mar 2021 14:04
Sag not only do they cruise around the board you also physically load the robots and people into them for a ride.

I don’t feel like that cards are really arbitrary. You can draw connections to them, like if you get a bonus for having Artists maybe it represents that you have the cheapest fares or discounts for the local art college, whatever. Some are also the usual link up bonuses too though. Set collection, I just see that as a barometer of performance and an way to have incentives built into the random setup.

Michael Barnes wrote: Sag not only do they cruise around the board you also physically load the robots and people into them for a ride.

Michael Barnes wrote: Sag not only do they cruise around the board you also physically load the robots and people into them for a ride.

No kidding. Someone retheme this into a Disney World monorail game stat!

jason10mm replied the topic: #320892 19 Mar 2021 16:38
Now I'm interested and this is in my head. You could have a cute little pop-up representations of each park, even the ones the current monorail doesn't serve, and there are the resorts. You can move people, maybe characters to meet parade times (since we all know there is only one mickey!), and parts for rides and park expansions....

Hmmm, gonna call Eisner, i think i can get the Disney World license pretty cheap these days

Saw a demo video and damn if those aren't some big chunky pieces. I was picturing the locos the size of a TTR car for some reason.

We were able to play a couple of practice rounds to get familiar with the rules. I'm glad we only committed to playing a few rounds, because I definitely need wipe my head clear of all the rules and strategies from other train games. This is so totally different. I'm looking forward to playing a full game this weekend.