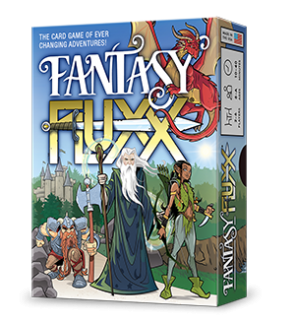 When I first saw Fantasy Fluxx, the first think I thought was “Well, there you have it, we've reached maximum Fluxx.” Cthulhu Fluxx? Check. Zombie Fluxx? Affirmative. I guess it was only a matter of time before we received a generic Fantasy Fluxx.

And, yes, you'll find a bunch of the Fantasy tropes in Fantasy Fluxx in the form of Keepers (the cards you need to collect to win): The Helpful Elf, The Dwarven Warrior, and the Wise Old Wizard. But Looney Labs mines our nostalgia in all the right ways. Take some of the Goals (the combination of cards that it takes to win a game): They are a plethora of “Oh, I get that reference!” masterpieces.

What about Second Breakfast!
The Wand Chooses the Wizard
I Drink and I Know Things
I'll Most Likely Kill You In the Morning
Army of Darkness

Yes, it is Lord of the Rings, The Princess Bride, Harry Potter – You know, The Usual Suspects (no, not the movie, just that all of the aforementioned references were hardly a surprise). With “Geek Culture” becoming interchangeable for “Pop Culture” most everyone will know the material. But, wait, what is this? One of the rule cards is Mythtery Play. Oh, that has to be reference to Robert Asprin's Myth series! High School Me was over the moon with that call back. Okay, truth be told, it sent adult me running to my Bookcase to pull out my collection of the series and, well, moon over it. (I think we may have found one of roots to the pun obsession).It is those “Deep Geek” references that made me smile. Plenty of times, I would point at a new goal or new rule and glance around the table for knowing nods from the other players. But the sly winks aren't restricted to the Keeper and Goal cards. Action cards (always a staple of the series) come in a the flavor of spells like Healing (that allows you do bring a card “back from the dead” aka the discard pile) or the old standby Fireball (which we all know is good in ANY situation...but mostly for blowing stuff up). It is fun to see that the references aren't just from movies or books but from the roots of RPGs. 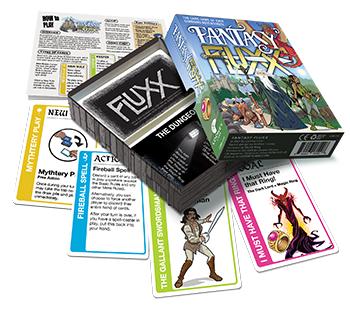 The Magic Ring and the Invisibility Spell adds a new twist beyond the traditional ever changing rules of Fluxx. Now, you can turn your Keepers “Invisible” so that other players can't mess with your cards. A simple flip outwards of the card in your hand serves as a reminder. It's not only cute, it fits right in with the Fantasy Theme. Of course, you can't win with Invisible cards, so you have to turn them visible again to be triumphant.

Fantasy Fluxx could have easily have been a stuffy version of the same tired old Fantasy stuff we've seen before. Instead, the lighthearted take makes it true to the “Fluxx Feel.” The only feel that I didn't care for in this game is that the cards themselves have a “stickier” feel that the other Fluxx titles in my collection.

March 02, 2021
Rating
3.5
Fantasy Fluxx
Fantasy Fluxx could have easily have been a stuffy version of the same tired old Fantasy stuff we've seen before. Instead, the lighthearted take makes it true to the “Fluxx Feel.”
W
WadeMonnig Top 10 Reviewer 195 reviews