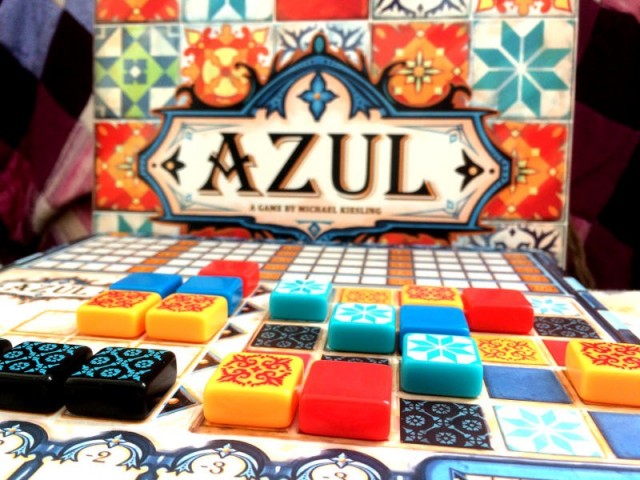 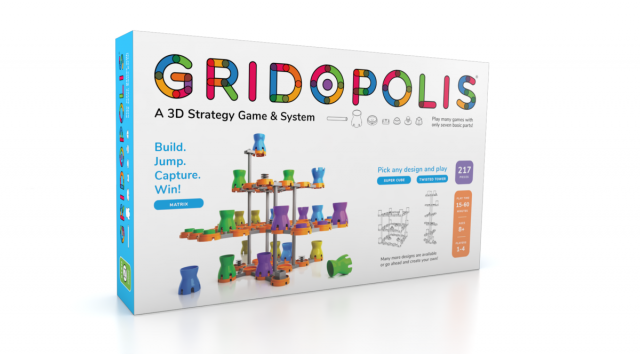 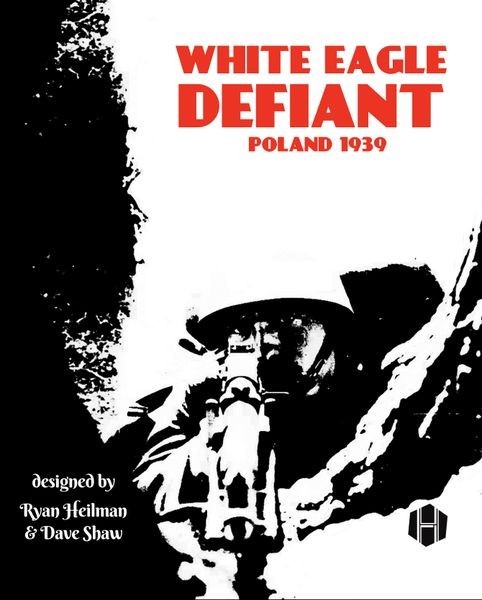 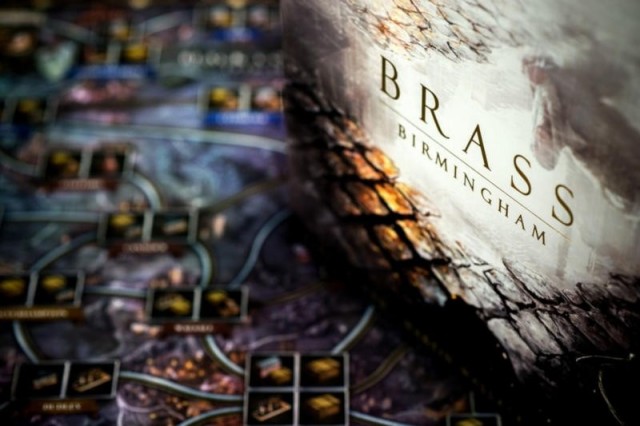 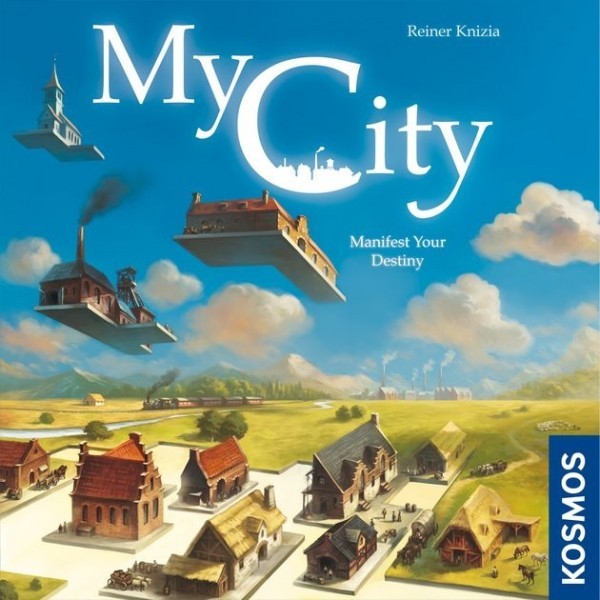 We Built My City With Polyominoes - Review 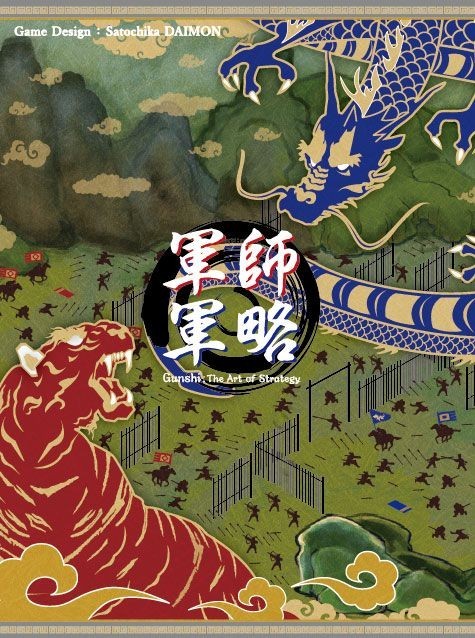 Gunshi: The Art of Strategy in Review 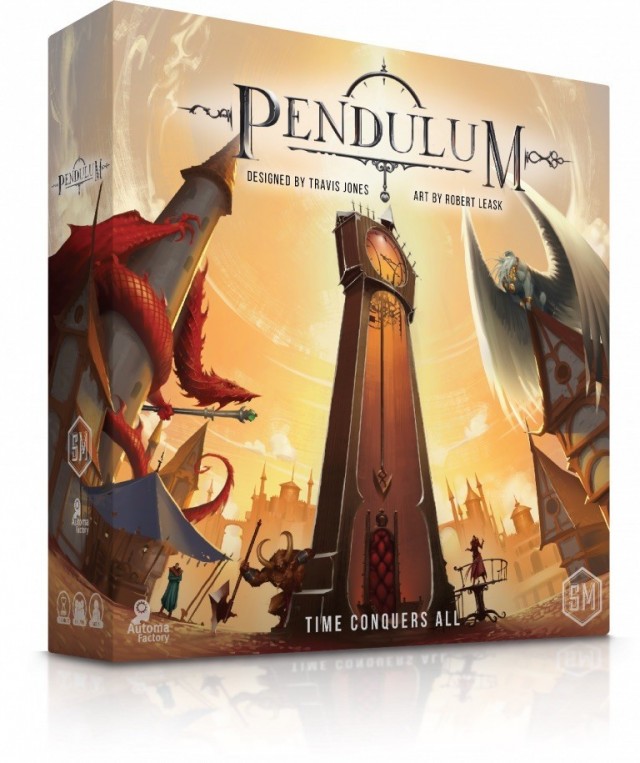 The Sultans of Swing: A Pendulum Board Game Review 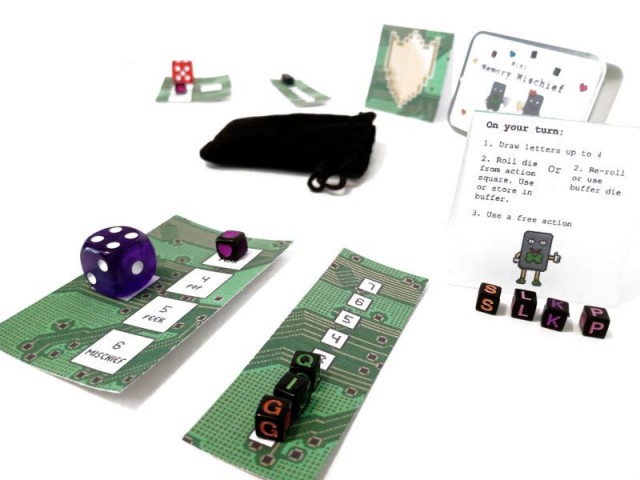 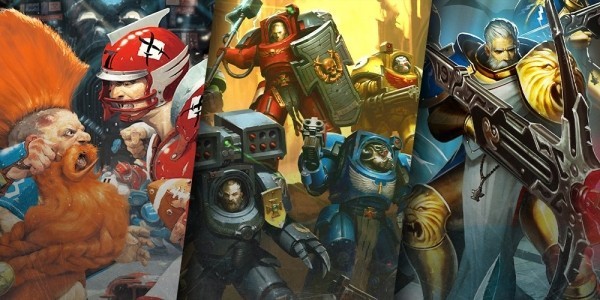 Games Workshop’s 3 New Board Games - Warhammer Fun for Everyone 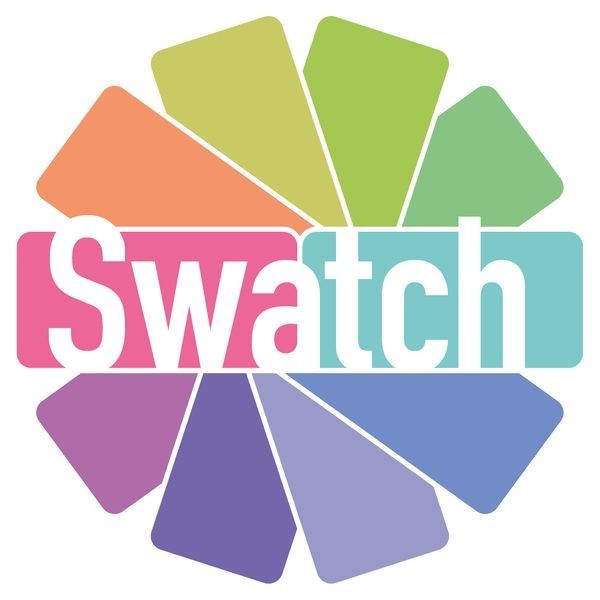 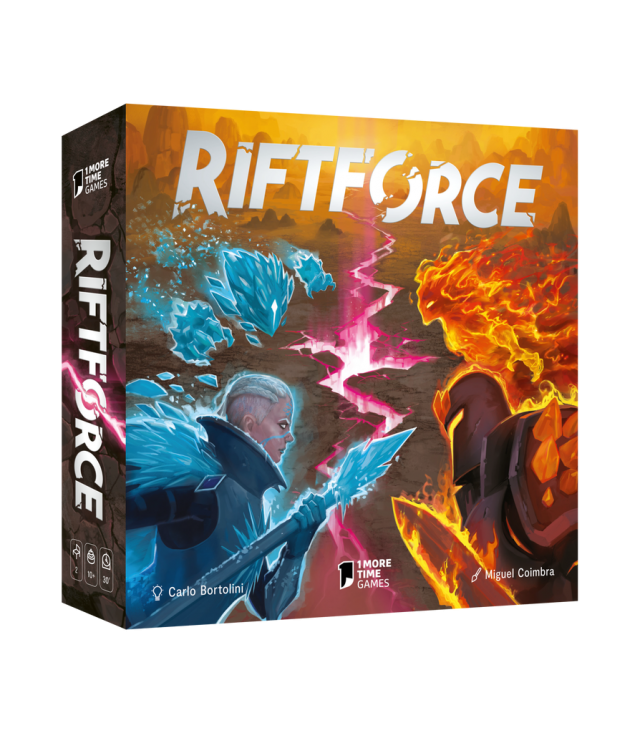 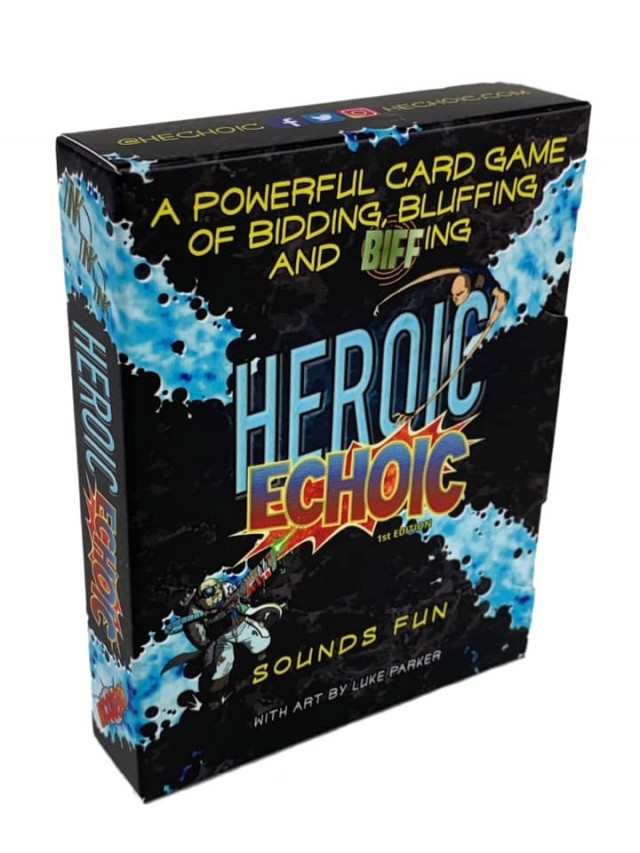 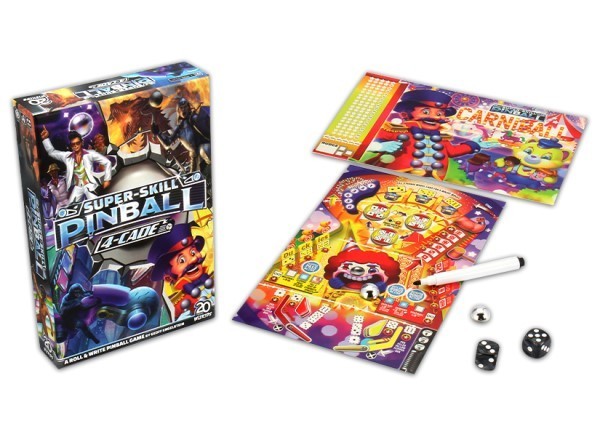 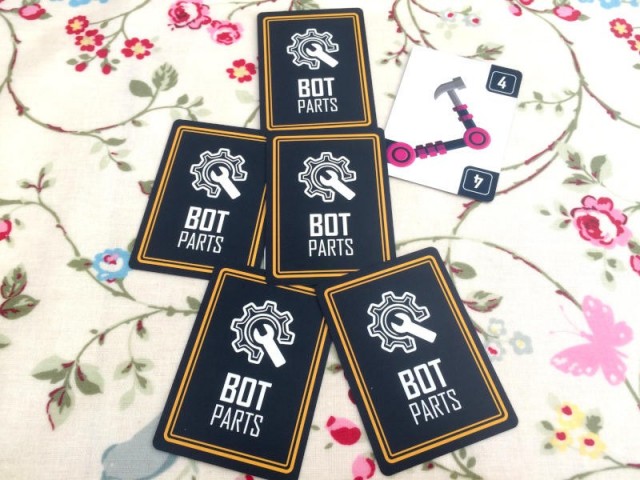 Bots Up Board Game Review 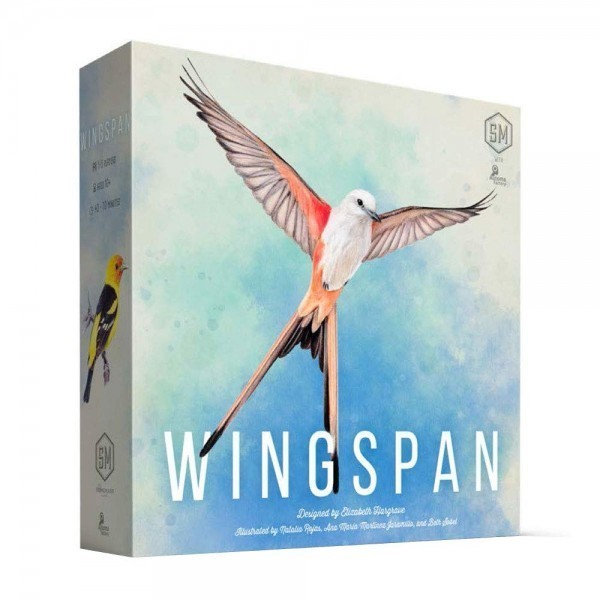 From Tip to Tip-Taking Measure of Wingspan: A Wingspan Board Game Review 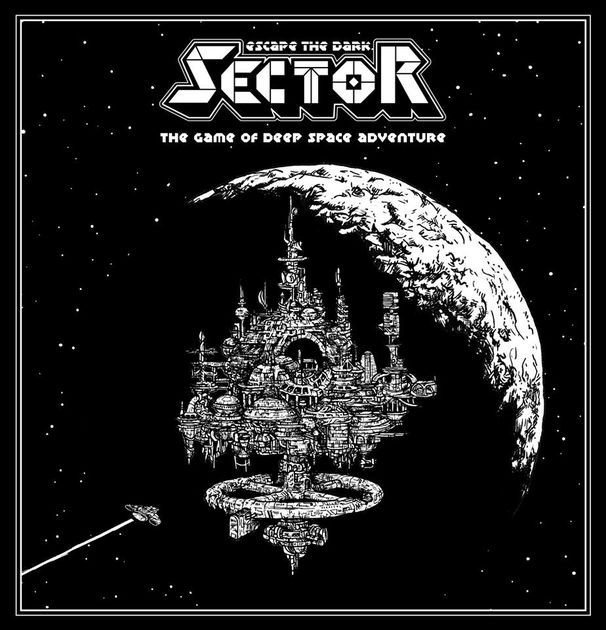 Escape the Dark Sector: Half Cocked but Fully Loaded 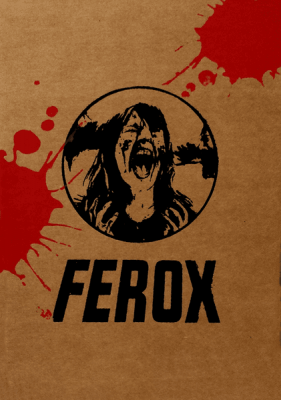 Before the spine ripping evolution of video games usurped their place in the pantheon, it was VHS video nasties that- along with Heavy Metal Music and Dungeons & Dragons- formed the third pillar of pernicious influence most often charged with corrupting the nation’s youth and keeping Mary Whitehouse awake at night.

Before the spine ripping evolution of video games usurped their place in the pantheon, it was VHS video nasties that- along with Heavy Metal Music and Dungeons & Dragons- formed the third pillar of pernicious influence most often charged with corrupting the nation’s youth and keeping Mary Whitehouse awake at night.

Untethered from the need for cinematic distribution, the home video phenomenon saw an explosion of fucked-up exploitation films that catered to humanity’s atavistic need for sex and violence, unspooling mile after mile of intestinal carnage directly onto the small screen via ‘mom and pop’ video outlets who were more than happy to peddle this filth directly into the suburban consciousness. 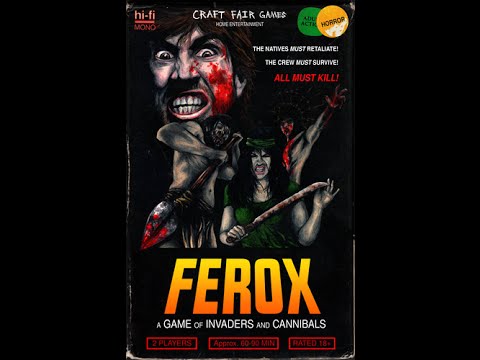 Of that initial explosion, two of the most controversial entries were the twin ‘nativesploitation’ ‘classics’ Cannibal Holocaust and Cannibal Ferox. These unflinching journeys into the heart of darkness traded upon the fallacy of an early entry in the ‘found-footage’ myth – winking ever so slightly as they hemmed and hawed as to the real-life origins of their footage. Better to let the public believe what they would – all the better for sales.  Like ‘Faces of Death’ and other nasties of its lowbrow ilk, the misapprehension that the footage was real both suspended disbelief and opened wallets worldwide as our weird desire for shock and transgression powered them into the annals of popular culture as swiftly as a helicopter piloted by a coked up diabolist.

If the intervening years have robbed them somewhat of this fabled notoriety, they have also gifted them an additional layer of kitsch appreciation. As relics of their era they embody a perfectly clueless capsule of 80’s excess – a camp, coke-fuelled distillation of Reagan/Thatcher era morality and strangely prescient portrayal of both colonial attitudes and national psyche. They’re also funny as shit.

It’s in this revisionist reading that Ferox by indie upstarts Craft Fair Games revels. But make no mistake, this is still a seedy fucked-up game for seedy, fucked-up gamers. It’s also wildly accessible, fun as hell, and in possession of more hand-cut charm than most more established entities could ever wake sweating from a fevered dream of. 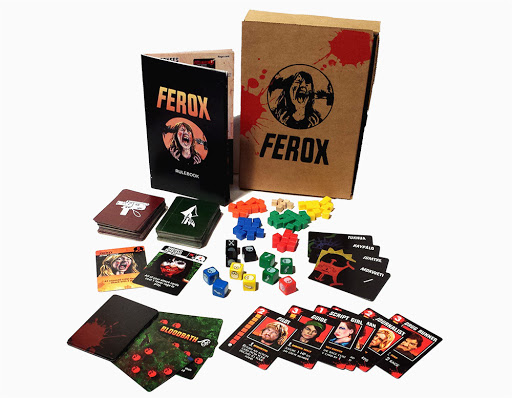 Recently reprinted in limited numbers, this 1v1 hand management take-that-a-thon is a perfectly weighted take on its source material, with just enough tactical depth to prompt repeat plays even as it speeds by in a blizzard of gore and profanity.

A film crew’s drug addled voyage into the jungle to ‘document’ the natives has come terrifyingly unstuck- with their chopper going down, leaving them stranded deep in the bowels of the Amazon. From out of this primordial soup, the crew (a cadre of unlikeable archetypes ranging from Pilot to Drug Runner) find themselves hunted by a quartet of cannibal tribes, eager to experience the contact high that devouring this new prey will bring.

The game then takes the form of the crew’s desperate flight to the safety of the rescue chopper. To reach it they will have to endure the predations of the ravenous natives in a succession of bloody encounters that will invariably leave both sides with a slew of corpses in their wake as proceedings escalate to their desperate, nerve-shredding climax.

This ragged retreat will comprise a set of six scenarios, each of which tasks the harried crew with dispatching a certain number of famished nemeses to proceed, whilst the native player hurls hordes of warriors their way in an attempt to whittle their number in a succession of desperate mouthfuls. 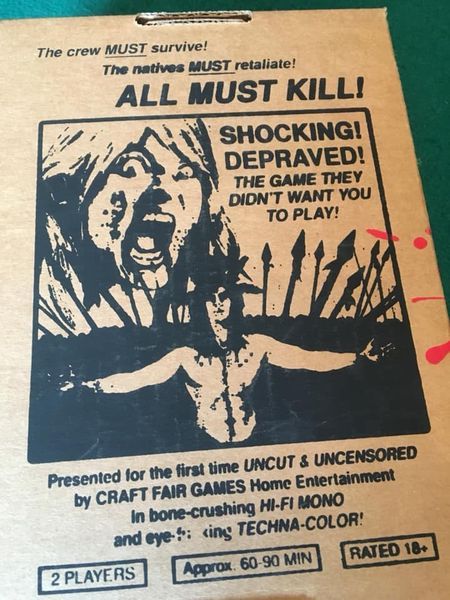 At the outset, both crew and cannibals will draft a set of ten starting cards from a generous deck of 50+ . This initial arsenal forms the draw deck from which they will fill their hand as the turns tumble by and the bloodlust mounts.

Deep in each asymmetric deck are a wicked selection of items, actions and attacks, thematically culled from their scandalous source material and staggered in efficiency by their cost to deploy.

The currency in question is ‘rage’ and it underlies what is perhaps the game’s cleverest conceit. On each turn players have the option of either drawing a card to bolster their hand, or playing a card to unleash their horrific urges. In order to play a card one has to pay its associated cost in rage, but in doing so they aren’t pooling their cubes into a passive neutral repository- they’re gifting them to the other player. This mechanic alone enables a fantastic sense of tension, as the tug of war between build-up and release swings to-and-fro between players who are always left teetering on the verge of a grisly comeuppance should they let fly with a heavy assault, knowing that in turn they are further enabling their opponent with each clattering cube.

As the turns tick by and your hand grows, the selection of insane cruelties you can inflict on your opponent blossoms, lending you further options even as it bloats your draw deck, miring it in a web of unpredictability that must be judiciously managed if you are to optimise your assaults. 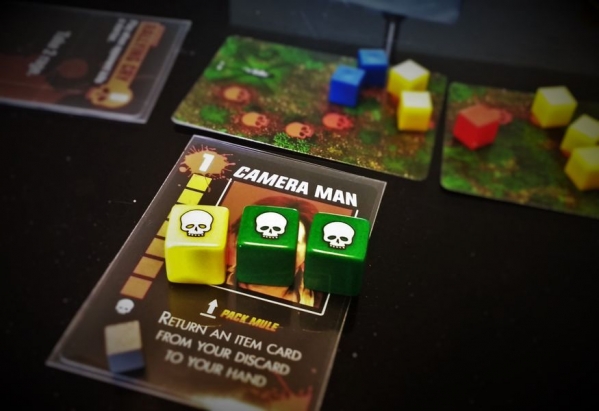 Wildly outnumbered, the crew have the advantage of being somewhat more robust than their persecutors, being in possession of individual abilities and a number of ‘hit points’ to burn through before they succumb, whereas the natives, overwhelming in number – are dispatched with the resolute punctuation of a single emphatic blow. At the start of each scenario both players choose which crew or tribe members to ‘expose’- enabling them to engage but also leaving them vulnerable to morbid retribution.

Clashes are resolved with a set of custom dice that can either lead to satisfying slaughter, demoralising injury or ignominious retreat, lending an element of real risk to every destructive excursion. Layer on top of this the added frisson of ‘response’ cards that can turn the tides of even the most well-planned assault and you’re left with a tense game of cat and mouse with both players marshalling their resources in a bloody war of attrition that takes no prisoners as bullets fly, machetes rend and teeth tear greedily into human flesh. 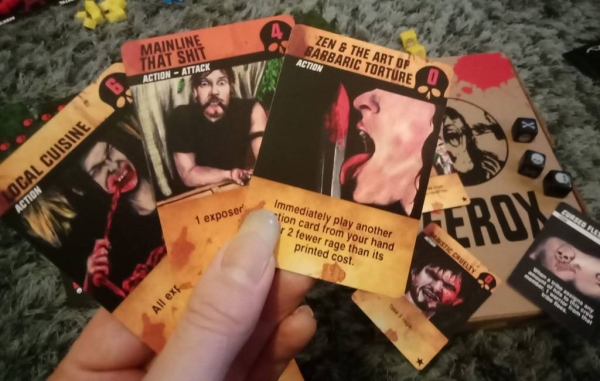 It’s wild, it’s obscene, it’s disgusting- and the artwork of Ryan Sheffield sells it perfectly. From heroin assisted bouts of oblivion, to ritual sacrifice, to the cloying stench of burning villagers – each shocking turn of events is illustrated with a character and impact that draws you in as you embrace the most reviled parts of your nature in clawing desperately for survival, morality first compromised and then utterly abandoned in the hot wet stink of the jungle.

It’s not for the faint of heart, yet it never errs too far on the side of the questionable- even if it does frame the natives as somewhat disposable assets. You certainly won’t weep for the deaths of the crew as they’re torn screaming asunder. These are terrible, terrible people, and much like in the celluloid inspiration from which it draws its theme- any reading of proceedings must take into account its clumsy critique of the ‘othering’ inherent in the colonial mindset. 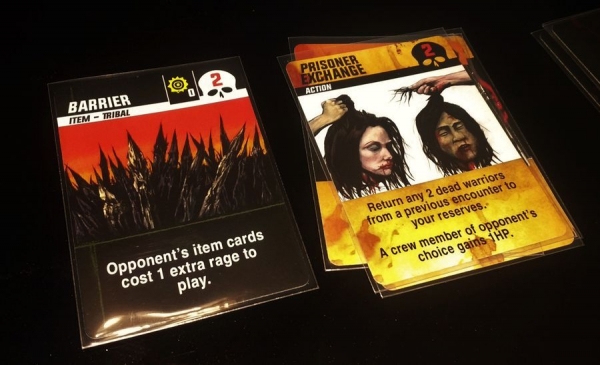 It’s in that gruesome moment that you’ll realise you’ve scarcely glanced up from the table in forty minutes, rivetted as you were by the terrible certainty that was unfolding before you. Then you’ll swap sides and go at it again, revealing a fresh selection of atrocities as the deck seeds your hand anew with aberrant possibilities.

With its disregard for notions of good taste and acres of powdered go-faster swagger, Ferox is the perfect example of what inspired indie gaming can bring to the table in what can otherwise be an industry compelled by financial incentives to play it maddeningly safe.

The smell of the hand cut components blends with the lurid art in a perfect miasmic cloud of idiosyncratic charm that can only exist in the kind of games hand stitched under a flickering bulb by small crews of lunatic auteurs. In tandem with their latter offering ‘Trash Lords’, Ferox outstrips even that wild ride in its positioning of Craft Fair games as one of the most exciting developers hurling spears at the elephant of industry from its bedevilled fringes.

What’s more- all of their titles are available as print and plays you can download from their site absolutely free.

Hunt it down, tear the still-beating heart from your next games night and hold it aloft as you salivate in grisly triumph.

Andi Lennon is Sydney based writer, musician and soap dodger. He graduated from Wizbang University with full honours and no teeth. When he isn't feeling conflicted about Morrissey he likes to play indie games with a dubious 80's aesthetic.

You can read more of his work by visiting Mongol Cult

Dr. Mabuse replied the topic: #315271 16 Oct 2020 16:21
Another solid review Andi! When you mention hand cut components are you referring to the print and play? I don't think the cards were hand cut in the produced version.

This sounds AMAZING. And a game that had better be super fast to teach because there is no way it will last otherwise.

And all this cannibalism talk makes me want to design a bluffing game where you have to trick cannabalistic hordes into eating your prion and parasite infected people instead of your healthy ones. Fun for the entire family!

Dr. Mabuse wrote: Another solid review Andi! When you mention hand cut components are you referring to the print and play? I don't think the cards were hand cut in the produced version.

Cheers man, I really dug your take on it too. That smell is from the laser cutting of small batch games I think. The Gamecrafters aroma. I love it. It's probably giving me cancer.

birdman37 wrote: I'd assumed that there was an actual severed hand in the list of components.

I think that's in the forthcoming expansion. Great for holding your draw deck!

jason10mm wrote: You name drop Reagan but it was actually Tipper Gore that got heavy into that censorship of music stuff.

This sounds AMAZING. And a game that had better be super fast to teach because there is no way it will last otherwise.

And all this cannibalism talk makes me want to design a bluffing game where you have to trick cannabalistic hordes into eating your prion and parasite infected people instead of your healthy ones. Fun for the entire family!

Yeah, I threw 'Mary Whitehouse' in there as a nod to UK readers cos the whole 'video nasty' thing was more a UK concern. If it was about stickering Judas Priest LP's then Tipper gets the nod for sure.

It's super quick to teach hey. I have victims up and running in five minutes, but there's depth there that reveals itself after further plays so it's win/win.